Best of 2018 | Highlights from one fantastic year 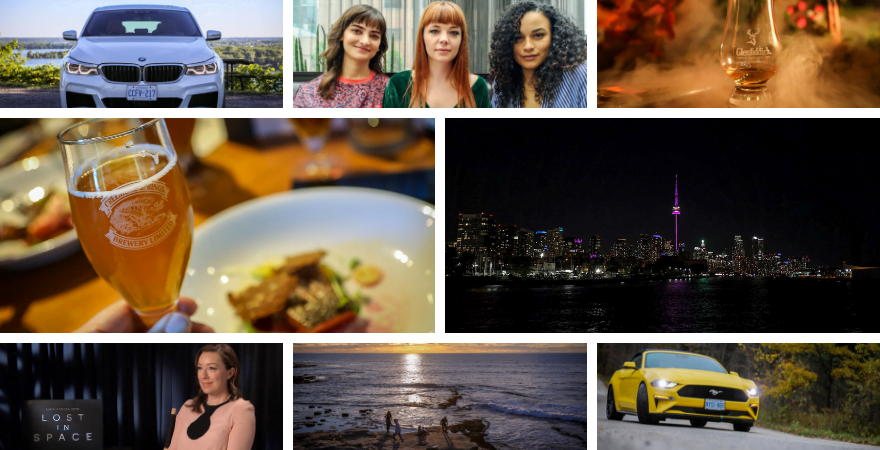 Time for a little celebration dance, because 2018 was an incredible year for The GATE. And, yes, this may be a little late, but since I’m proud of all the highlights from last year, it’s taken me a while to write it all up.

So without further ado, here are just a few of my favourite highlights from 2018. Thanks to all of the talent, publicists, brands, companies, partners, events, and destinations that made it such a great year at The GATE.

Interviews are always one of the biggest highlights of any year. A lot of folks do some amazing work to arrange interviews for me, and 2018 was maybe my best year ever.

Some of my big highlight interviews? Well, actor Danai Guaera spoke with me for the incredible hit Black Panther while she was in Toronto; I sat down with Molly Parker for Netflix’s Lost In Space; I visited with the Arkells before their Rally event in Hamilton, thanks to Air Miles; I sat down with one of my favourite actors, Paul Bettany, for Solo: A Star Wars Story, then Brad Bird for Incredibles 2; and in November I flew to New York City for an interview with the great John C. Reilly for Ralph Breaks The Internet.

I also interviewed Lex Scott Davis for The First Purge; Reggie Watts for JFL42; legendary actor Karen Allen for the anniversary of Scrooged; Alexander Ludwig and I chatted about Vikings; and during the CBC Winter Preview I spoke to Heartland stars Graham Wardle and Amber Marshall.

Oh, and I got to interview an actual chocolate scientist thanks to M&Ms.

Last of all, I can’t post anything about it yet, but I was on set for one of the final episodes of an epic science fiction series, so I can’t wait to share that one later this year.

Then, there’s TIFF. The Toronto International Film Festival is always my favourite time of the year. It’s a jam-packed ten days of interviews, events, and a chance to see some incredible films before they come out in theatres.

This year was possibly my best at TIFF to date too, and after 18 years covering the festival, I’m pretty proud of that.

A few of the big highlights for me included director Jasmin Mozaffari and actors Michaela Kurimsky and Karena Evans for Firecrackers; Suki Waterhouse and Hari Nef for Assassination Nation; writer and director Ash Mayfair for her feature film debut, The Third Wife; and the director and two of the stars of the Bollywood film Husband Material, with Anurag Kashyap with Taapsee Pannu, and Vicky Kaushal.

There were also a few interviews I can’t even post yet, because they aren’t coming out until later this year. That includes Nekrotronic with Monica Bellucci; and Jay Baruchel and director Dean DeBlois for How to Train Your Dragon: The Hidden World.

Another highlight was seeing director Damien Chazelle’s First Man, starring Ryan Gosling as a young Neil Armstrong, at the Visa Screening Room thanks to Ticketmaster. The Princess of Whales is exactly the kind of place I love seeing films during TIFF, and First Man did not disappoint. It’s by far one of my favourite films of the year.

Beyond interviews, I had drinks with Grey Goose, as Global Ambassador Joe McCanta showed me their featured cocktails for TIFF 2018; I checked out the Bask-it Style lounge, Suite on the Sixth, and the Stylist Suite in Yorkville; plus I saw Netflix’s Outlaw King at the Scotiabank IMAX theatre, and the very impressive If Beale Street Could Talk by director Barry Jenkins.

San Diego and Tijuana were a big highlight for travel last year, especially all of the fantastic food (Born and Raised will be a tough restaurant to top), seeing Balboa Park, visiting the San Diego Zoo, and seeing the story behind what Tijuana is really like.

In terms of events too, the Terroir Symposium at the Art Gallery of Ontario was a fascinating look at food and the while food and drink industry, with some wonderful sessions like the Craft Cocktail Master Class workshop that was hosted by Robin Goodfellow. The food at the event was also beyond incredible, naturally, and from a range of Ontario chefs.

In June I also had the chance to fly over downtown Toronto–and even fly the plane myself–thanks to Hamilton Watch who celebrated 100 years of timing the skies. Back in 1918 they launched their first aviation-themed watch, and to celebrate, I had an incredible experience and I got to wear one of my favourite watches for the flight too.

In July, my family and I not only went camping at Silent Lake in one of their lovely new cabins for a long weekend, we also stayed at Viamede Resort for a couple of days, and for that whole trip we drove the Ford Expedition to get around and take everything we needed. There was room to spare, to say the least, and it was such a comfortable ride.

That month we also had a cottage weekend when my father came in for a visit, and I drove the BMW 640i Gran Turismo for a week, which was one of the most interesting, comfortable cars that I drove all year. The car is packed with features, and power, and has more trunk space than your average car too.

After that, I was invited to Tennis Talent Day at the Rogers Cup with Danone, and that day I had the chance to play on the court, and then I was back a few days later with Emirates to watch a game and chat with Matt Schmid, Senior Vice President, Emirates North America, for the updated Emirates flight schedule between Toronto and Dubai. The Emirates box at the Rogers Cup is the kind of space you walk in to and never want to leave.

Then, late in the fall, CIBC took me to Havana right here in Toronto at an event for their Aventura credit card. The event featured an amazing Cuban band, Cuban drinks and snacks, and a bit of a preview of the new Aventura benefits that now include special airport lounge access, mobile device insurance, and a lot more.

In the fall, and leading into winter, my family and I went driving for a weekend in a gorgeous yellow Ford Mustang EcoBoost convertible, and it was the highlight of my fall for cars. The car is seriously fast, surprisingly roomy, and we even managed to have the top down. Hearing the purr of the engine and realizing how powerful it is was like nothing else I’ve ever driven before, to be honest, so that was a huge treat.

My family and I also had the chance to go see Mary Poppins Returns together, thanks to Disney, which was one of the few films we saw together last year, and it was so much fun. I absolutely adore Emily Blunt, and she was the perfect Mary Poppins. It was also great seeing Emily Mortimer at the event, who played Jane Banks in the film.

And there were a number of great meals and tasting sessions to end 2018, including an evening with Gledfiddich at Barchef where we tasted some of their latest scotches.

I also enjoyed a special tasting session with Canadian Club Chronicles 41 Year Old. Whisky legend Jim Murray led me through a tasting with brand ambassador Tish Harcus, and it was really a remarkable experience. The whisky is nothing short of “sensual” as Murray himself called it.

And last but not least, one of my last events of 2018 was a dinner with Guinness and chef Clodagh McKenna, who showed off some recipes and tips for the holidays, including a really delicious turkey recipe with Guinness and Chestnut Gravy.

That’s really just the tip of the iceberg considering all of the events that I went to last year. I certainly also owe thanks to a lot of other teams and events, including Figures in Toronto for hosting me for a fantastic dinner after TIFF; Ford Canada again for their Ford Harvest event in the fall; Creemore Springs, Blue Mountain and the Westin Trillium House Blue Mountain for hosting me and my family during their Oktoberfest event; Mickey Mouse for meeting me at Yonge-Dundas Square when he came to Toronto to celebrate his 90th birthday; and MasterCard for bringing me out to Cirque du Soleil’s Corteo after they announced new Priceless experiences for cardholders, including the chance to shadow a performer backstage.

My year wouldn’t be complete if I didn’t talk about technology and gadgets, and I had a really active year for testing out products.

Among all the things I tested and tried out, I had a lot of favourite things. It’s actually hard to pick out just a few things that I loved, so I’ll have to run through a bunch of them.

Out of all the phones I tried last year, the Google Pixel 3 and Samsung Note 9 were my favourites, but the Huawei Mate 20 Pro is a close third. It also depends what type of phone user you are, since I would say that the Note 9 makes the best business-class phone, but it’s hard to top the camera on the Pixel 3, and the overall experience is clean and simple.

I’m also a big fan of my Samsung Galaxy Watch, which I’ve been using for over a month now, and because it comes with a built in LTE connection, I love that I can leave my phone behind and use the Galaxy Watch for calls, reminders, and as a workout tracker.

In terms of other gear in my house, I adore my Xbox One X. My daughter and I are addicted to the One X (we play Minecraft together on it all the time), and it’s our 4k Blu-ray player for our TCL Ultra HD Smart LED TV. It’s amazing seeing how good games like Forza Horizon 4, Assassin’s Creed Odyssey, and Shadow of the Tomb Raider look with the One X and the TCL TV.

I also started flying more seriously in 2018, with the DJI Mavic Air, and I tested out the DJI Mavic Pro. The drone rules in Canada are set to change this year, but for serious flyers drones are just getting better and more exciting, and the DJI models are very hard to top.

At home I’ve been loving my Dyson Cyclone V10 Absolute vacuum, that’s been an unbelievable upgrade for cleaning the house, and the Dyson Humidifier that’s helped with allergies in the summer, and keeping the house from turning into a dessert this winter.

Check out a gallery of some of the highlights from 2018: