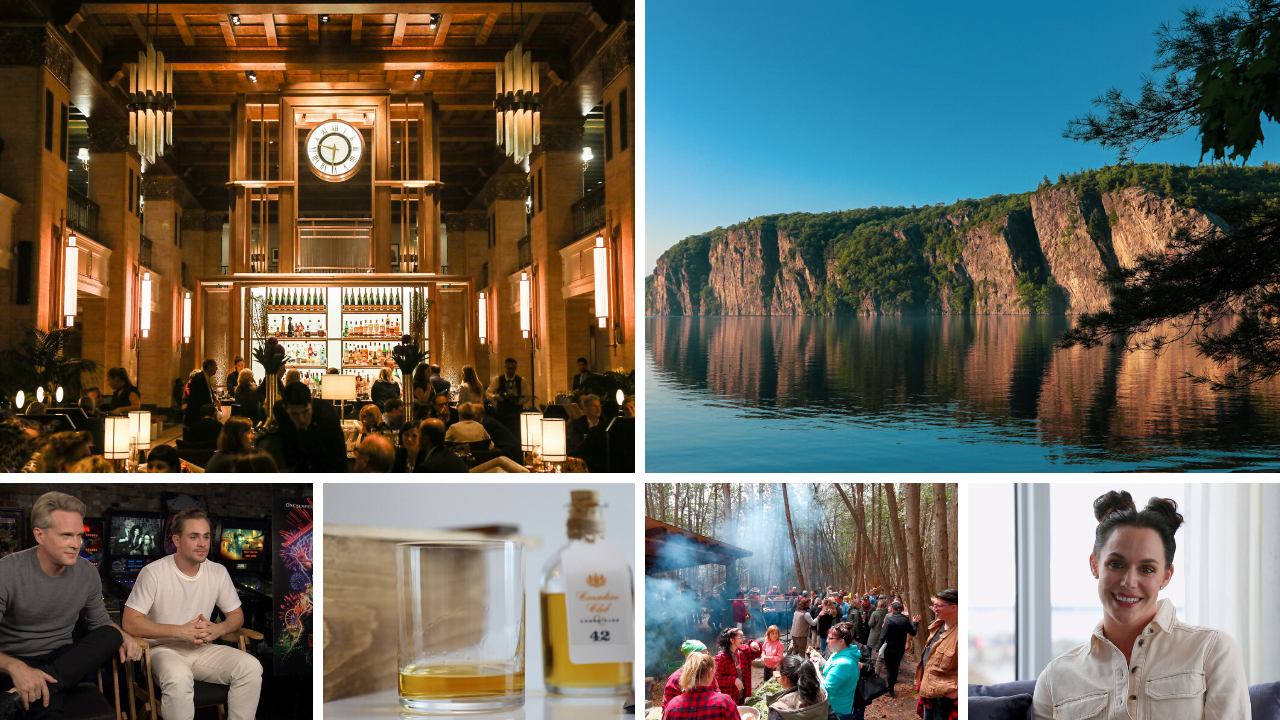 The last two weeks have been a bit of a break for a change, after what I can only call one of the best years ever for The GATE. There were highs and lows, but most of all, I just feel very thankful.

November marked The GATE’s 19th anniversary, and that led right into the biggest and best Holiday Gift Guide I’ve ever put together. There’s a lot more to celebrate though, so I’ve put together a recap of some of my favourite things from the year, which in a way is also a huge thank-you to everyone who followed along in 2019, invited me out for some incredible events and interviews, and supported me and the site.

As always, thanks especially to my wife and biggest supporter, Aisha. I’ll try not to be mushy, but The GATE really wouldn’t exist today if it wasn’t for her support–every day, every week, every month. Thank-you.

There was no big party, but I’m really proud to say that The GATE has been here, covering entertainment, for 19 year now, and it only gets better. The media landscape in Canada has changed a lot, there’s a lot of room to grow, and the trip has been worth every moment. It’s sometimes been hard to keep doing this, but I’m thrilled to be here. I hope 2020 is an even bigger year.

And that leads me into one of my favourite success stories: YouTube. The GATE’s YouTube channel hit 8.6k subscribers this week, and I’m working hard to reach 10k soon. In 2019 there were 1.8 million video views, and my videos were played over 60k hours. Yes, hours. That’s 2,500 days of video watched. Being utterly honest here, if it wasn’t for that channel, I’m not sure where The GATE would be because YouTube is one of the best ways I get content out there, and make something from it.

The Toronto International Film Festival was also a big deal, as always, and it was my 19th year covering the festival. That seems impossible, and it’s changed so much even over the last few years, let alone since 2001 when I started covering it. I had a great year though, between premieres, screenings, and interviews, including Constance Wu for Hustlers, Barry Keoghan and Nick Rowland for Calm with Horses, and events like the Devour! Food Film Fest party, and the OLG Dream Deck with the TIFF Rising Stars.

And then there were the interviews. Sitting down with Joonas Suotamo from Star Wars: The Rise of Skywalker was a big highlight, but so was my call with the hilarious Jay Pharoah for JFL 42.

I also interviewed Cary Elwes and Dacre Montgomery for Stranger Things 3 on Netflix, Tessa Virtue, Stana Katic for Absentia season two, Josephine Langford, Hero Fiennes Tiffin, Anna Todd for After, Ricardo Hoyos for Bumblebee, and Phyllis Logan & Lesley Nicol for Downton Abbey. Plus there was Pam Marsden, the head of production for Sony Pictures Animation for the incredible Spider-Man: Into the Spider-Verse, and Marvel Studios’ executive vice president of production, Victoria Alonso for Avengers: Endgame.

And I also interviewed Amber Marshall for Heartland season 13, one of my biggest interviews on YouTube last year; Hudson & Rex star John Reardon (and Diesel); Mr. Red Green himself, Steve Smith; I was on the red carpet for Frozen 2 with Idina Menzel, Kristen Bell & Josh Gad; and for the Baywatch 30th anniversary, I chatted with Erika Eleniak and Nicole Eggert. Whew.

Last year started off with CES in Las Vegas and a week of digging into new technology, trends, and big reveals with impressive brands like Creative, Samsung, Hisense, TCL, MSi, and Google. There’s never enough time to take it all in, but CES really is an amazing event for consumer technology (and I’m headed off to CES 2020 tomorrow).

In February, I checked out the Canadian International Auto Show with Ford, Lincoln, and BMW, which is always a big day filled with some of the most incredible vehicles, and increasingly impressive technology that’s changing how I look at transportation and mobility. BMW’s iDrive 7.0 alone is jaw-dropping, not to mention the BMW X7 and 8 Series.

On October 30th, I paid a little tribute to National Publicist Day and the hundreds of people who make what I do possible. They’re the people who invite me out to sets, events, interviews, and so much more.

Before TIFF, I also had a unique dinner with Xbox, that they dubbed “Cookin’ Up A Swarm”, or more aptly, “Gears Gore-met”. The event featured dishes at Stackt Market inspired by Gears 5, and they were moderately gross, but also delicious.

But three of my favourite events of the year were a bit more adventurous.

In the summer, CLIF Bar invited me out for a day of urban adventure in Toronto. We started out with the Edge Walk at the CN Tower (gulp), walked to the St. Lawrence Market, biked to the lake (well, that didn’t quite work out for me, to be honest), and then there was a trip in a giant canoe.

In the fall, Ford sent me out with the Ford Ranger to try aerial game trekking, and it was probably the hardest thing I’ve ever done, but it was also amazing. The fall leaves were stunning, and the course gets increasingly harder and harder the further you go, which is both challenging, and feels like a real accomplishment.

Last but not least, I had a mission in Toronto thanks to Jack Ryan. For the second season of Jack Ryan on Amazon Prime Video, I jumped in a helicopter and flew around downtown Toronto scouting locations for the spy. I’ve flown over the city before, but a helicopter was a new experience, and really makes you feel like you’re hovering over the buildings at times.

In 2019 I joined the Travel Media Association of Canada to get better connected to the travel industry and other journalists. So far I’ve only done one event with them, but I’m really thrilled to have joined the association.

For trips, I had quite a big year, visiting Chicago for a number of days, celebrating the Fairmont Royal York’s 90th anniversary and staying at the hotel for some reviews and articles coming up. My family also spent nearly a week on a road trip to New Brunswick and St. Andrews By The Sea, we visited Ottawa, went skating at Arrowhead provincial park, had a road trip to Bon Echo with the Ford Explorer, and we went to Silent Lake with the Honda CR-V.

Last, and certainly the most festive, I celebrated the holidays early at Universal Orlando, checking out all their Christmas decorations, food, events, and the Universal Holiday Parade featuring Macy’s. It was a fantastic way to end a trip to Orlando, and I have a lot to share from the trip coming up too.

Throughout 2019 I had opportunities to try and use some of the best technology available, from the Samsung Galaxy S10, which I previewed at a special dinner at K?st, in Bisha Hotel; to spending a few weeks trying out the incredible DJI Mavic Pro 2 drone

Last year I also was invited to the unveiling of the Ford Escape 2020, I had a demo of the new Roku devices, received a pair of the impressive first generation of Focals by North smartglasses, tested the Osmo Mobile 3, reviewed the Hisense H8 4k ULED TV, tested out most of the new Amazon devices (I love the new Echo Dot with clock), and became an expert with the Huawei P30 Pro.

For a major tech deep-dive, I also went on a tour of the Honda plant in Alliston, Ontario where they make the Honda CR-V, which was fascinating.

Earlier in the year I tested out the Google Nest Hub, Insta360 Go, Hyundai Kona EV, Samsung Galaxy Tab S5e, Dell Inspiron 14 5000 laptop, and posted one of my most popular tech articles of the year: video of Adam Savage’s real Iron Man suit.

And to top it all off, I’ve also been testing the latest Apple iPhone–the iPhone 11–and I really love it. From the interface, to the camera, and just the overall performance, it’s an impressive phone, and the battery lasts all day. Very few phones can last a whole day for me, but the iPhone 11 has done it, and I’m looking forward to shooting a bit more with it over the next couple of weeks.

Lastly, there’s all of the food and drinks I’ve had the chance to try and write-up this year.

The two best events all year was the Don Julio dinner for Cinco de Mayo and the Terroir Symposium’s incredible Rural Retreat.

For Don Julio, I got to try all of their best tequila, had an amazing meal at El Rey, and they even sent me home with a wee agave plant that I somehow haven’t killed yet.

And the Terroir Symposium is an annual conference for the food and hospitality industry that celebrated this year’s event at The Carlu. It was an amazing day of food, sessions, and unique perspectives, including the fact the team serving lunch rescued ingredients (things destined to be thrown in the trash) to make an incredible meal.

The highlight of the Terroir Symposium though is the Rural Retreat that happened at South Pond Farms this year, and includes local food, drinks, and the chance to meet and chat with some of the speakers and vendors.

At home, I sampled a lot of whisky, vodka, gin, and other spirits, and I have a lot of favourites. Alberta Premium 20 Year Old Rye and Canadian Club Chronicles Issue No. 2 – The Dock Man were wonderful. Lagavulin Offerman Edition 11 Year Old single malt Scotch whisky was a huge surprise for me, and I tried a number of phenomenal Grey Goose cocktails too.

The biggest whisky surprise though had to be the whisky advent calendar from Drinks by the Dram and That Boutique-y Whisky Company. So many great whiskies to try, and so many surprise finds I never knew I would love.

Finally, I visited Nugateau on Queen Street West in Toronto before the holidays and while I already was familiar with their work and delicious eclairs, I was blown away by what they’re doing. If you haven’t tried their pastries, you are absolutely missing out.

And that, in a nutshell, was 2019. There was so much more to 2019 than what I can sum up here, but it was an incredible year, and I feel very, very fortunate for every experience, moment, and opportunity.

Thanks once again for reading, and please stick around for 2020.